Learning to think in Go 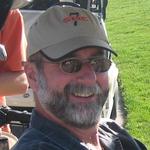 I was using an excellent go icmp library recently. I got hung up on dealing with a received MessageBody type that I knew was really an Echo type, but I could not refer to the fields in the Echo struct. I think my C/C++/Python background got in my way here.

Insert blinding flash o' light here. Using an interface definition, this Go icmp library author allows the library user to easily convert an received message body into its appropriate struct equivalent. Whoa. That sort of power was not so obvious to me when I first read about the Go interface.

You can also find David Pointer on Twitter, GitHub, LinkedIn and Stackoverflow.